The US slashed interest rates by 0.25 percent for the second time this year amid concerns about slowing economic growth and global trade tensions.

Many expected the change, which reduces the Federal Reserve's reference rate to a range of 1.75% to 2%.

The decision to cut rates comes as the central bank faces uncertainties over President Donald Trump's trade war with China, slower global growth and a downturn in the US manufacturing sector.

The Fed said in a statement that "fixed corporate investment and exports have weakened."

The cut was approved in a 7-3 vote, with two officials wanting to keep rates unchanged and one arguing for a larger cut of 0.5%.

But President Trump, a frequent critic of the Federal Reserve president for not going far enough with rate cuts, was dissatisfied with the reduction.

Shortly after the announcement, he tweeted, "Jay Powell and the Federal Reserve fail again. No" courage, "" meaningless, no vision! A terrible communicator! "

Mark Grant, managing director and chief global strategist at B. Riley FBR, Inc. said: "The Fed cut is in line with consensus expectations."

"Your future prospects will certainly not please our president.

Image:
Donald Trump said the Federal Reserve president has no courage, no sense, no vision.

But Powell told a news conference after the move represented a "mid-cycle adjustment" and that the bank was prepared to be "more aggressive" with lower borrowing costs, as when US growth slowed down enough. to justify this.

Despite continued presidential criticism of him and the Fed, Powell said "morale is high" at the bank.

"We are doing the best work possible for the American people," he said.

US markets fell largely after the decision.

The US-China trade war has increased the likelihood of a rate cut, although recent oil price spikes on the back of Saturday's attacks on Saudi oil facilities have added unforeseen complexity to the decision.

They have also been considered an argument by some market watchers to leave the cost of borrowing at the current rate, as these attacks have caused the biggest rise in oil prices in more than two decades.

The cut comes days after the Fed made its decision to support banks' nightly financing needs, after borrowing costs soared on Monday.

Greg McBride, chief financial analyst at Bankrate.com said: "Despite the tensions in the money markets that forced Fed intervention this week, there is no indication of any imminent return to quantitative easing and balance sheet expansion." 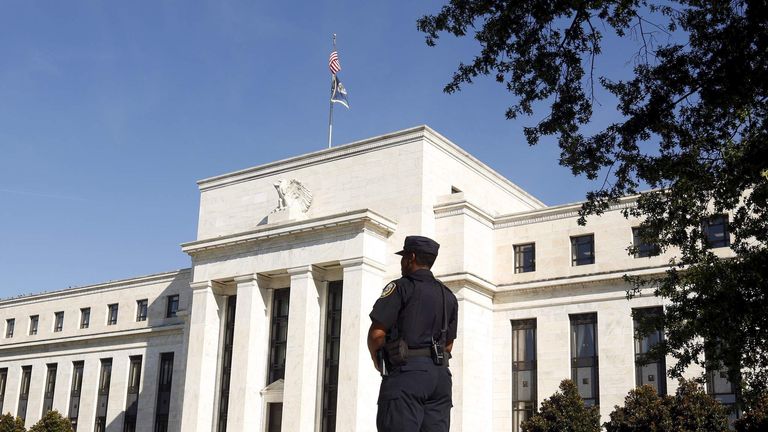 Image:
Fed pushes more than $ 125 billion into short-term US bank financing this week

The US central bank has pumped more than $ 125 billion over the past two days into the commercial banks' night repo (repo) markets, where they rely on short-term financing, in the first Fed intervention since 2007-2009. financial

US interest rates were cut in August for the first time since 2008 by 0.25% amid concerns about the global economy and weak inflation, leaving the benchmark between 2% and 2.25%.