Japanese economy expected to fall at the highest pace in decades

Covid-19 is making its mark on economies around the world and Japan is no exception. Firstly, the BoJ revised downward its GDP growth forecasts for all regions of the country for the second consecutive quarter, with declines in consumption and production, mainly automotive, putting pressure. The Central Bank indicated that all regions of the country are “getting worse” or in a “severe” state. Subsequently, a poll conducted by Reuters reinforced this perspective, indicating that the world’s third largest economy will contract at the highest rate in decades. A 5.3% contraction is expected this fiscal year, followed by a 3.3% recovery next year. The economy will grow at an annualized rate of 10.0% in the current quarter, after having shrunk 23.9% in the second quarter ended in June, according to the survey. A large proportion of respondents predict that the BoJ’s next step will be an expansion of stimuli, but the pandemic does not see a banking crisis. Two-thirds of economists expect Japan to expand its next stimulus package this year. It should be noted that Tokyo has so far presented two stimulus packages, totaling $ 2.2 billion.

Technically, Eur / Jpy failed to test again at 61.8% fibonacci retracement (122 yen), eventually correcting downwards. However, the 50% (120.6 yen) offered support and paused losses. We focus on “pause”, as the technical indicators continue to point to a break at this level, with 38.2% (119 yen) as the next support.

Croatia and Bulgaria may join the euro

(1941)
$129.33
2 x USB 2.0 to 4 pin USB Type A, 1 x headphone input and output 3.5 millimetre3 x superspeed USB 3.0 - 9 pin USB type A, 1 x network - RJ-45. Designed... read more
(as of August 11, 2020 - More infoProduct prices and availability are accurate as of the date/time indicated and are subject to change. Any price and availability information displayed on [relevant Amazon Site(s), as applicable] at the time of purchase will apply to the purchase of this product.)

Over the past week it has been possible to see a curious pattern. On the one hand, a set of macroeconomic data at European and American level (mainly on the labor market) further fueled the prospect that the worst of the pandemic’s impact is behind us and that a recovery is already underway. . On the other hand, all over the world, but especially in the USA, there is a marked resurgence in the number of Covid-19 infections, with last Friday over 60 thousand new cases in the largest economy in the world. world – a new daily high. This acceleration may indicate the possibility of a second wave of the virus, if it has not already started. Thus, despite the encouraging data, the economic recovery may be considerably slower than initially expected, with several US states re-imposing containment measures, which should weigh on consumption and the labor market. Now shifting the focus to the European continent, there are reports that the ZE authorities are ready to allow Croatia and Bulgaria to enter the ERM-2 mechanism – a preliminary state for the adoption of the single currency. It should be noted that after countries enter ERM-2, they remain in the mechanism for about two years before beginning practical preparations to join the ZE, a process that lasts approximately another year, making 2023 the first year for possible membership euro. If confirmed, the measure will pave the way for the first expansion of the ZE since 2015, when Lithuania joined the monetary bloc, which now has 19 members. This week (Thursday) the ECB’s monetary policy meeting will take place, with President Christine Lagarde, already signaling that no changes should be made, and the Bank must adopt a “wait and see” stance.

Technically, Eur / Usd broke the $ 1.13 resistance high. However, the gains were temporary and the pair retreated around this level. The pair thus continues to lateralize between the 61.8% and 100% fibonacci retracement ($ 1,115 and $ 1.14) during the last month and a half. The MACD starts to show a null signal, suggesting that the pair should remain in this range in the short term. 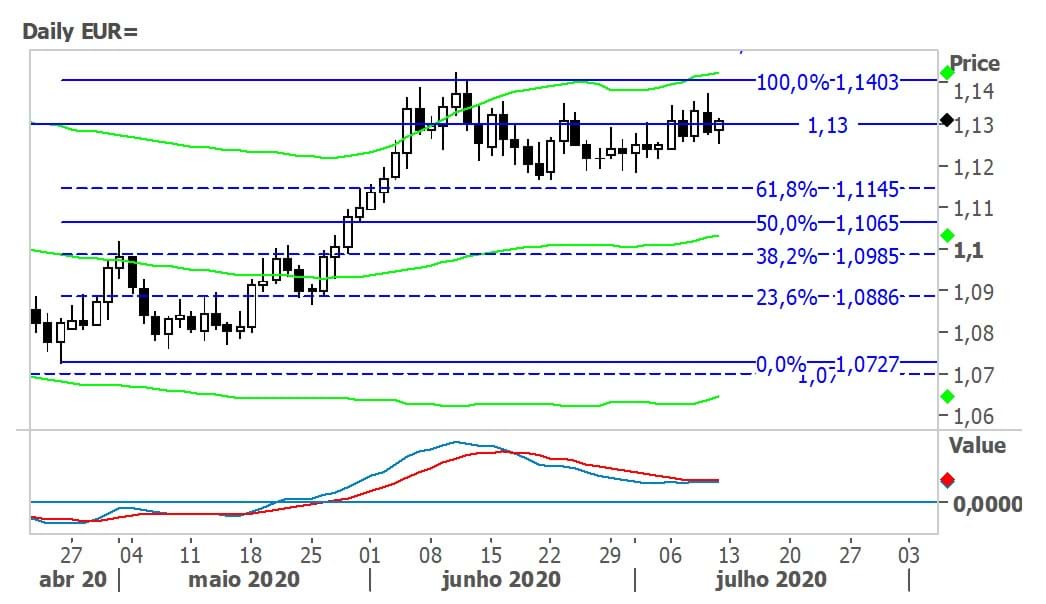 Crude oil ended the week with a negative variation. The fall in raw material prices occurred, in large part, due to the continuous increase in the number of cases of Covid-19, mainly in the USA, with investors fearing that new blockages could again harm fuel consumption in the country. These fears were echoed by the EIA, which, despite revising its demand forecasts for this year at 400 thousand barrels, to 92.1 million, warned that the spread of Covid-19 represents a risk for them. Indications that Libya will reopen its terminal and the unexpected increase in crude inventories in the USA (5.7 million barrels in the week ended July 3) also contribute to the negative sentiment.

Technically, after the April and May gains, the prospects for crude oil increasingly begin to dissipate. On the one hand, the raw material broke the lower limit of the upward channel in which it traded in recent months. On the other hand, he has been testing the $ 40 for the past few weeks, but has yet to succeed in breaking. The MACD reversed the buy signal, which may signal a downward correction in the very short term. However, the losses could be temporary, as the $ 36 has offered ample support for black gold, and there may be a lateralization between this level and the $ 40 in the short term. 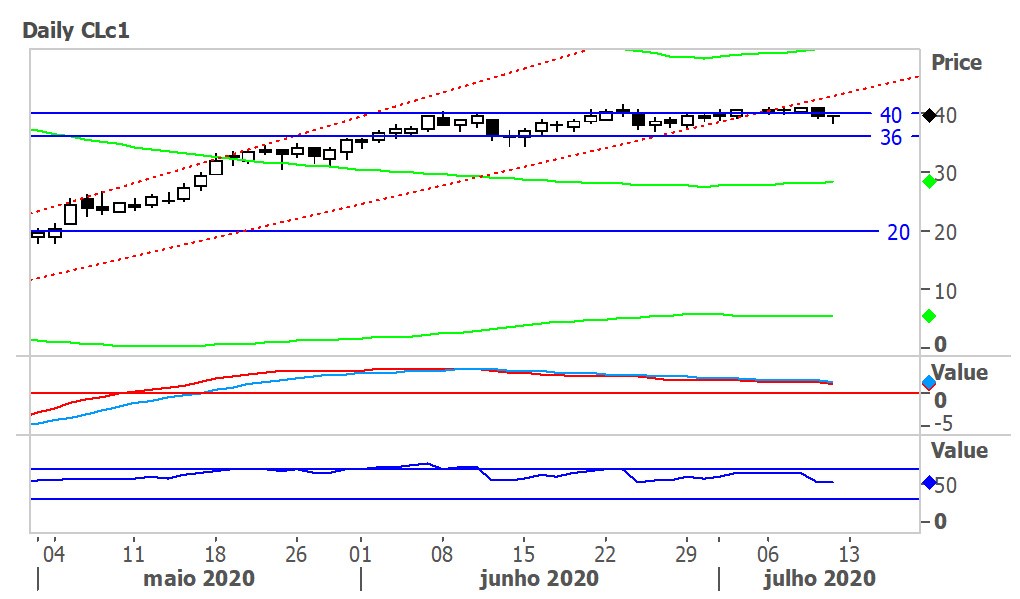 (182)
$579.99
Your career essential: With Wi-Fi 6 (2x) and Bluetooth(R) 5 connections, HP True Vision HD webcam and an integrated numeric keypad, this 15-inch lapto... read more
(as of August 11, 2020 - More infoProduct prices and availability are accurate as of the date/time indicated and are subject to change. Any price and availability information displayed on [relevant Amazon Site(s), as applicable] at the time of purchase will apply to the purchase of this product.)

Like oil, the spread of Covid-19 dictated the movement of gold in the past week. The precious metal, one of the main refuge assets, benefited from the increase in risk aversion, skyrocketing to new highs of almost 9 years, above $ 1800 / ounce.

On a technical level, after spending the last months to consolidate between $ 1670 and $ 1750, the metal broke the upper limit of this range upwards and is now testing the $ 1800 resistance. Technical indicators are beginning to provide slight buying signals, which could signal a break in that resistance and a test at $ 1900 in the short / medium term. 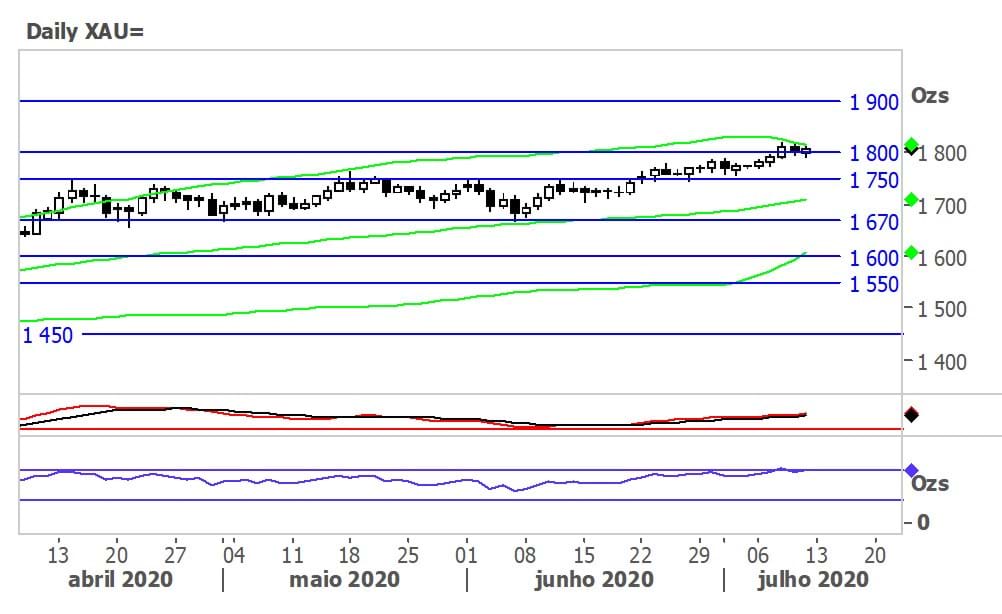 The technical analyzes published here are in no way intended to constitute advice or a recommendation to buy and sell financial instruments, so analysts and Jornal de Negócios cannot be responsible for any losses or damages that may result from the use of this information. . If you wish to have any questions regarding Technical Analysis clarified, please contact the IMF or the Jornal de Negócios.

UN council at odds over peacekeeping...