The Huawei MateBook 14, Huawei’s new mid-range notebook model, was developed with the needs and demands of young professionals in mind. The new Huawei MateBook 14, on sale in Portugal starting today, 9th of July, allows the perfect balance between excellent performance, elegant design and convenience.

With a 14-inch FullView screen, a metallic chassis, a 10th generation processor from Intel Core i7 and i5, the Huawei MateBook 14 also features a dedicated NVIDIA MX350 graphics card that guarantees better support for games.

Wang Yinfeng, President of PC and Tablet Product Line at Huawei Consumer BG, points out that “the interconnection and interoperability between PCs and smartphones allows consumers to enjoy a unique experience. Together, they are a fundamental pillar that support the strategy in all Huawei scenarios. Combining a premium design, FullView screen, high performance and better connectivity features, the Huawei MateBook 14 is the perfect companion for consumers looking for notebooks with extreme portability, powerful performance and an excellent connection in all situations ”.

(2432)
$17.60
ENHANCED DURABILITY - Advanced Performance Leather thumb and palm patch increases the feel, durability and grip performance in key stress areas.EXTRAO... read more
(as of August 11, 2020 - More infoProduct prices and availability are accurate as of the date/time indicated and are subject to change. Any price and availability information displayed on [relevant Amazon Site(s), as applicable] at the time of purchase will apply to the purchase of this product.)

The market for ultrathin PCs has been showing rapid growth worldwide, which has led Huawei to reinforce the bet in this segment with new equipment. The new MateBook 14 bets on the same design lines as other models in the range, with the 14-inch FullView Screen, 100% sRGB, a 90% ratio and, in the i7 version, a touch screen with 10 touch points.

Unlike other manufacturers, Huawei equipped the Huawei MateBook 14 with a 3: 2 screen, which effectively increases the common visible area by 8.4% of 16: 9 screens. This ratio makes this MateBook 14 more ergonomic and more suitable for tasks that require greater productivity, as it allows content to be displayed more fully.

However, at a time when manufacturers are incorporating Full HD screens into their smart devices, Huawei has taken a step forward with the first Huawei MateBook of all time, equipping it with a 2K screen. The FullView screen on the Huawei Matebook 14 supports a resolution of up to 2160 × 1440, at 185ppi, 100% of the sRGB color gamut, a contrast ratio of 1000: 1 and a maximum brightness of up to 300nits. Features that, on the one hand, allow MateBook to bring any type of content to life, from still images to Blu-ray films, but which, on the other hand, facilitate the work of graphic and video editors, reproducing any color with a realistic vibration.

The high-precision multi-touch screen of the Huawei MateBook 14, version i7, responds to every touch with total precision. With this model, Huawei developed the new Fingers Gesture Screenshot feature that allows you to capture the screen by sliding three fingers down on the screen, and even extract text from the captured image, so that edits can be made efficiently.

(3864)
$6.15
BROW COLOR THAT STAYS PUT: Define, fill and sculpt your brows like a pro. Stay Put Brow Color delivers superior staying power with up to 16 hours of w... read more
(as of August 11, 2020 - More infoProduct prices and availability are accurate as of the date/time indicated and are subject to change. Any price and availability information displayed on [relevant Amazon Site(s), as applicable] at the time of purchase will apply to the purchase of this product.)

Designed based on the concept of “Pure and invisible”, the Huawei MateBook 14 has an elegant and minimalist metallic chassis. In addition, despite the heavy hardware that powers the device, this MateBook 14 is extremely portable, measuring 307.5 x 223.8 x 15.9 mm and weighing just 1.53 kg. Another of the highlights, which was already present in previous models, is the built-in camera that is discreetly hidden in the backlit keyboard until the moment it is necessary to activate it, a feature that guarantees even more safety to the user.

With unprecedented performance, the Huawei MateBook 14 comes equipped with a 10th generation Intel Core processor. In addition to upgrading the processor, Huawei equips this Matebook with up to 16 GB of memory and 512 GB of SSD PCIe storage, in version i7, which guarantees a smooth and stable experience in any operation and content creation. The Huawei Matebook 14 also features the latest high-performance NVIDIA GeForce MX 250 graphics card (TDP 25W) with 2 GB of GDDR5, which makes editing and video games easy, fast and reliable. 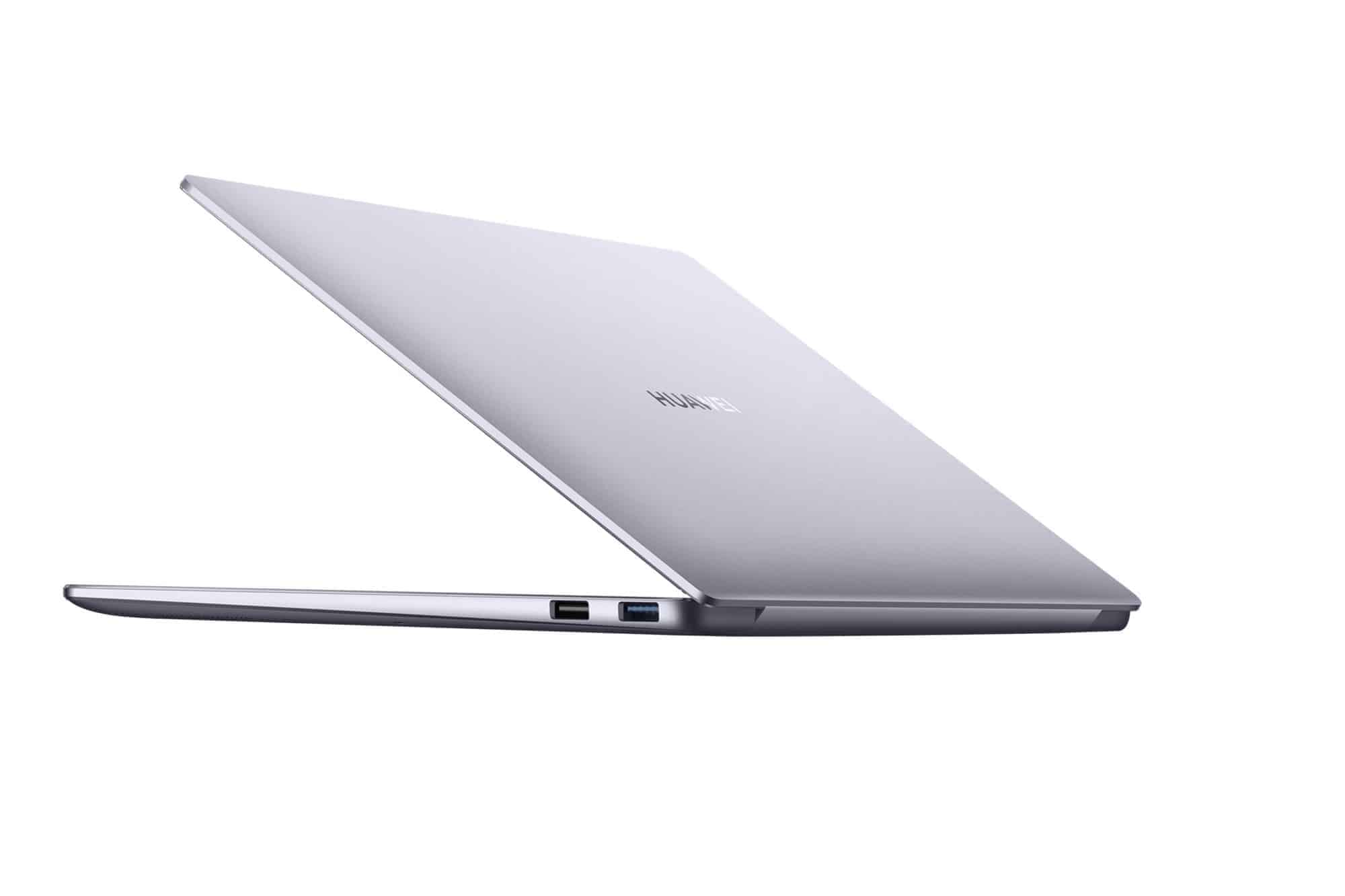 Since powerful performance leads to the need for effective cooling, Huawei makes available in MateBook 14 the new design of the Shark Fin 2.0 fan, which dissipates heat more quickly using two heat dispersion tubes. This technology means that the workflow will be seamless and smooth, even when running multiple applications at the same time or playing intense games.

With MateBook 14 it is possible to play videos in 1080p until 14.7h, perform regular operations until 13.6h or browse the Internet for 10.7h, once the 56 Wh high capacity battery allows to make an intelligent energy management. In addition, the 65 W USB-C charger with Fast Charging technology allows 3 hours of office use with a charge of just 15 minutes. This charger has a detachable cable that can be used to charge or transfer data and also to charge the battery of some Huawei smartphone models.

At Huawei we believe that the PCs of the future will be smarter, more efficient and more connected. For that reason, our devices are equipped with Multi-Screen Collaboration technology, a function of Huawei Share, which we also brought to Huawei MateBook 14. The advantage of Multi-Screen Collaboration is not only in allowing the transfer of files between the PC and the smartphone, but also in making the perfect collaboration between these two devices.

In terms of the device’s unlock speed, the Huawei MateBook 14 has a two-in-one solution on the On / Off Button with Fingerprint Sensor6 for faster and more efficient Login.

In the Launch Campaign with the purchase of MateBook 14 you will have the offer of the Huawei MatePad T8 tablet, 6 months of free use of the Huawei Music service and 50GB of free storage for 3 months in the Huawei Cloud service.