Home sci-tech A sealed copy of Super Mario Bros. became the most expensive video game ever

A sealed copy of Super Mario Bros. became the most expensive video game ever

A sealed copy of Super Mario Bros. became the most expensive video game of all time, after being sold at auction for $ 114,000.

The 1985 cartridge, sold on Friday, July 10, during a public auction of comics and vintage art by Heritage Auctions in Dallas, Texas, has been sealed for 35 years. It took 29 offers to push the final sale price beyond the previous record holder: $ 100,150 for another copy of Super Mario Bros. sold in February 2019. According to Heritage Auctions, the buyer wishes to remain anonymous.

So, why was this cart considered so special? It’s the Super Mario Bros. game cartridge. sealed with the highest rating (9.4 out of 10) ever offered at public auction and still maintains its original cardboard loop – a quality that makes it vintage among collectors. 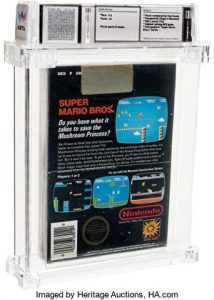 Super Mario Bros. it was not the only game sold on Friday at the auction. A prototype of the Sega Pluto-02 – Sega console (c. 1995-1996), brought a winning bid of $ 84,000. The prototype, from Sega’s canceled project to create a second model of the Sega Saturn console, was never released to the public before Friday.

The variant’s nickname refers to the formatting of “Bros.” on the front of the box, which confirms that this copy is from the first production of the title, effectively equal to a first impression. It is believed to be one of less than 10 in existence.